Mick Mountz, Kiva’s CEO and Founder, and his team did an amazing job of creating, building, and commercializing a revolutionary technology to transform how ecommerce distribution is done.  We, at Bain Capital Ventures, were fortunate to fund Kiva’s first institutional round in late 2004, when the company was turning its initial prototype into a commercial product.

We later led Kiva’s two subsequent rounds of financing, and while serving on its board the past 7+ years, I’ve learned many invaluable lessons about entrepreneurship and building a company.

1.   There is still a place for entrepreneurs to solve really hard problems with massive innovation

There have been several blog posts, most notably by Peter Thiel and Founders Fund, discussing the venture community’s lack of desire to fund transformational companies –those with disruptive technologies taking on big problems.  Mick saw this firsthand. When Mick first started Kiva shortly after the bubble burst, he was unable to raise funding on Sand Hill Road.  This ultimately caused him to move to Boston, where he raised his angel round and eventually his round from Bain Capital Ventures.

Before Kiva, Mick spent years at Webvan, and he could never stop thinking about changing the way ecommerce distribution was done. It became his mission and what led to Kiva. Mick’s eventual solution was simple but not an easy task technologically.

Instead of making warehouse workers go to the inventory, Mick set out to make the inventory come to the worker. He believed placing inventory on mobile pods controlled by autonomous robotic vehicles would significantly improve labor productivity. And by placing those mobile inventory pods on a grid pattern that could be dynamically altered based on demand, Mick could ensure that any of the millions of SKU’s that a customer ordered could be “picked, packed and shipped” as any other SKU in the warehouse. But Kiva’s real magic is behind-the-scenes software that powers the entire system.

The truth is, Kiva simply wasn’t a company that could be cranked out in weeks with some seed money, and the technical obstacles inherent in building a solution like this forced Kiva to invest years working on the solution pre GA. However, once they built a working and viable solution, they had the advantage of significant IP and few direct competitors.  This allowed the company to be laser-focused on R&D versus having to fund a sales and marketing arms race in a more typical crowded VC-backed space.

Kiva’s success proves there is still a place for entrepreneurs like Mick to solve really hard problems with massive innovation.

2.    Backing a founder who can go the distance

Kiva is a great proof-point in the power of founder-led companies.  Mick is a brilliant founder who has that elusive combination of technical horsepower, domain expertise, charisma, incredible confidence in the clutch, and inspirational leadership.  What Mick didn’t have was prior CEO experience as this was his first company.  However, what Mick lacked in experience on the general management front, he more than made up for in his product strategy, the effect he had on customers with his insights about distribution automation, and his commitment to building a strong company culture.

Clearly Kiva wouldn’t have been nearly as successful without the executive team that worked alongside Mick. In particular, Mick’s President and COO, Amy Villeneuve, brought tremendous organizational leadership and operational capability to the company. She was instrumental in helping scale the business.

But having Mick lead the company from beginning to end, made sure innovation, customer success, and culture trumped everything else.

3.    The influence of Apple is far and wide

Many people who have read about Mick’s story know that his time at Webvan inspired the idea behind Kiva.  What is less known is that prior to Webvan, Mick was a product manager at Apple.  Mick’s Apple experience was formative and influenced his product decisions at Kiva. 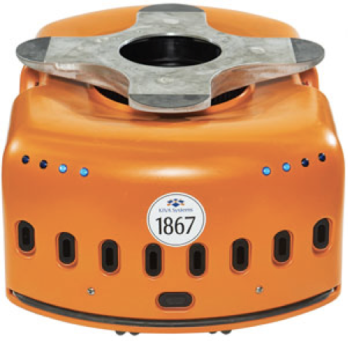 As you can see from the picture, the Kiva robots are elegant and beautiful – these are not your “father’s” industrial robots!  The entire Kiva system, the orange robots, the blue shelves, and the user-friendly station software, works together and is tightly integrated.  Back in 2005, I recall our board discussion about why Mick insisted Kiva construct the shelves in-house since we didn’t feel the shelving was as proprietary as the software or robots.  Mick’s response was really interesting.  He asked me if I thought my experience as an iPod owner (this was pre iPhone) would be nearly as seamless and awesome if Apple hadn’t provided an integrated solution with the player, the cable, the headphones, the software, and the iTunes store.  In a world where enterprise products are typically sold piecemeal (think SAP plus Oracle database plus Accenture consulting plus IBM servers etc.), Mick sold an end-to-end solution.  The result was that the Kiva solution simply worked and the customers loved it. – and that’s what matters.

While the revolutionary Kiva system was the foundation of the company, the fuel that accelerated growth was the ecommerce wave.  The growth of and transition to ecommerce was a forcing function to cause companies both big and small to rethink their entire distribution strategy and fulfillment operations.  While large centralized DCs worked for retail store restocking, in an ecommerce world, companies need smaller, more flexible DCs that were closer to their customer for faster delivery times.  This sea change is what drove Kiva’s steep revenue curve.

Ecommerce has also led companies to fundamentally rework how they think about demand generation, content creation, customer analytics, customer retention, merchandising, and order management.  Every major function of enterprise technology will have to be rethought, reformulated, and redone in light of ecommerce.  Kiva is a great example of a disruptive company in distribution.  Similar to Kiva, we will see other game-changing companies in these other functional areas.  These spaces are all up for grabs. Bain Capital Ventures has a number of portfolio companies in some of the spaces, and I expect we will see a long list of “winners” ride this wave.

Congratulations again to Mick and the entire Kiva team for building a truly great company and a disruptive technology.  We are thankful we were able to participate in this amazing journey.

Here is one of Kiva’s most iconic videos, the Kiva robots performing the Nutcracker…I never get tired of watching this, and I look forward to watching the Kiva team continue to pioneer bigger and better things as a part of the Amazon family!